Become King of the Ring 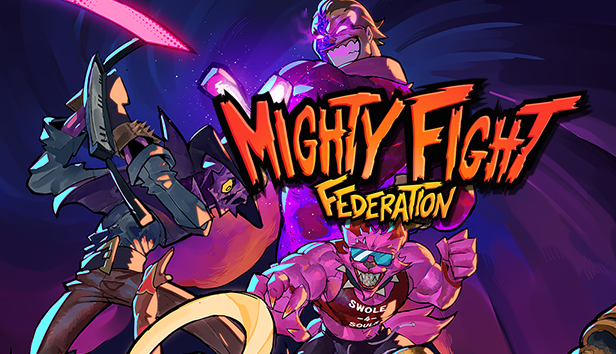 Put genre conventions into submission and prepare to beat down the competition with this competitive fighting experience unlike any other, available today on PC and PlayStation consoles

February 25th, 2021 – Knoxville, Tennessee – Game publisher Forthright Entertainment and tag-team partner Komi Games are preparing to lay some serious smackdown on the fighting game genre today as Mighty Fight Federation punches its way out of Steam Early Access for PC and enters the ring on PlayStation 4 and PlayStation 5. A lovingly-crafted homage to classic 3D arena fighters of yesteryear, Mighty Fight Federation has a zen-like focus on fighting game fundamentals to deliver a frenetic multiplayer no-holds-barred competitive fighting experience with a twist.

Mighty Fight Federation has spent six months in the Early Access gym practising its combos in which time the roster has filled up with 13 warriors from across the multiverse. Whether players prefer a powerful mauler, an agile technician or an unpredictable wildcard – Mighty Fight Federation’s squad is ready to rumble with a mix of exciting original characters and licensed crossovers including classics like ’Toejam & Earl’ and ‘Yooka and Laylee’, with ‘Kunio & Riki’ from River City Ransom coming soon as DLC. Now, the game’s incredible line-up is set to enter the ring and do battle against one another in the most electrifying pay-per-view event in the universe – The Mighty Fight Federation!

Mighty Fight Federation’s innovative combat system features ‘Hype’ mechanics that gives players the option to zone, evade, counter and play mind-games with their opponents no matter their fighting style. Unlike traditional fighters, in Mighty Fight Federation attacks can’t be blocked; instead, combos and attacks can be disrupted by spending hype energy. Dealing and receiving damage builds up Hype Energy which can be spent on Breakers to reverse an opponent’s attack or create custom combos. Activating their stock of Hype Energy at the right moment can be the decider between players inhaling the sweet smell of victory or laying on the ground bloodied, broken and shamed in defeat.

Mighty Fight Federation is playable with up to four players and crossplay ensures that epic chaotic clashes can take place locally or online. Comprehensive tutorials and training modes mean players of all abilities and fighting game backgrounds can hit the ground running, while veteran fighters can be sure they are landing every punch in this balanced and highly-competitive brawler thanks to its rollback netcode. Whether it’s a mono-e-mono, a triple threat or a fatal four-way, competitors can jump into the action and join the foray 24/7.

Komi Games is a small indie studio, based in Toronto, Canada, focused on creating innovative games that people love to play. Twitter, Facebook.